Is a Basic Uninterrupted Power Supply Really Worth It?, Digital News

I was asked to take a look at an uninterruptible power supply (UPS) from APC (Easy UPS BVX700LUI-MS, but let’s call it BVX700 for short) and I agreed anyway despite the fact that it is going to be a bit strange for a number of reasons.

For one, the BVX700 is a pretty basic inverter, making it pretty much a glorified battery pack with a few extra features. But within that characterization lies an ignorance that I think many of us share.

I probably had a few misconceptions as well and now is a great time to figure things out. So why would anyone need an inverter?

If you are vulnerable to the dangers of unstable voltages, surges and constant blackouts, the inverter is especially useful.

The problem is that we live in Singapore, which is pretty much free of these problems. What’s most likely to happen is that one faulty device triggers your entire circuit box and that alone is enough to give you a bad time.

The BVX700 is a line-interactive UPS, which means it is a hybrid type that only switches to battery power in the event of a problem. A true online UPS is a bit of a stretch in most cases and the hardware is on average more expensive.

Line-interactive solutions allow you to accomplish your main tasks for less money. It keeps devices running until you step in and initiate recovery protocols and at the same time it can also equalize wide voltage fluctuations (brownouts).

However, there are some fundamental limitations with a hybrid design; it generates simulated sine current, which means sensitive equipment like audiophile equipment and medical equipment may not work properly – but I don’t think that’s relevant here.

Why you would need an inverter

For most of us, there are two main reasons to have an inverter; one is when you’re performing critical tasks on a desktop – not the gaming genre, but who am I to judge your priorities in life – in which case that adds the only advantage a laptop has over its desktop peer in this scenario.

The other is when you have network-attached storage (NAS) on your network and you constantly use it to back up data or store critical files.

Power outages while writing data to storage can compromise the integrity of the array in the NAS.

NAS systems are often set up in Raid and failures may require you to rebuild the array with the latest backup copy, which most people don’t have – the NAS is often the backup. And anyone who works with NAS on a regular basis would rather avoid having the problem in the first place.

Thus, the UPS is also a natural companion to the NAS, and some NAS are even designed to work with the UPS and shut down safely under pre-configured circumstances.

Other potential uses don’t stray from the theme – if you’re on an important video conference call and for some reason can’t afford to suddenly give up, it makes sense to keep the router up and running .

Other possible cases where it is useful to have a constant power supply are when you have security cameras or baby monitor cameras that are not battery powered.

Is a basic inverter enough?

That said, we have to remember that the main purpose of these devices is to hook on like a plot armor gadget and buy you time so you can make your heroic comeback to save the day – your direct intervention is very necessary to shut everything down until normal power resumes.

The UPS is not designed to be a practical power source.

In other words, it’s not a bad thing that the BVX700 is a rather basic model because the added value for that $110 price tag is worth it.

For the price, we have to accept that the case is as basic as it gets – it’s just a plastic shell. A glossy front panel and LED windows are the only elements that offer decorative qualities.

However, APC uses two translucent strips to diffuse the LEDs which indicate the UPC is working properly and I think they are a bit large.

It might be a little shiny if it’s on your desk. I prefer placing it in a corner as the LEDs are bright enough to give you a status update from a distance. That said, the alarm is loud enough to alert you to a problem, and thankfully at regular intervals.

And in addition to a power button, there’s a 5V 1A USB port on the front so you can trickle charge your cell phones or headphones. This feature is more of an afterthought, but it’s nice to know that you can charge your phone without worries, even if you have to live with the fact that it’s really slow. 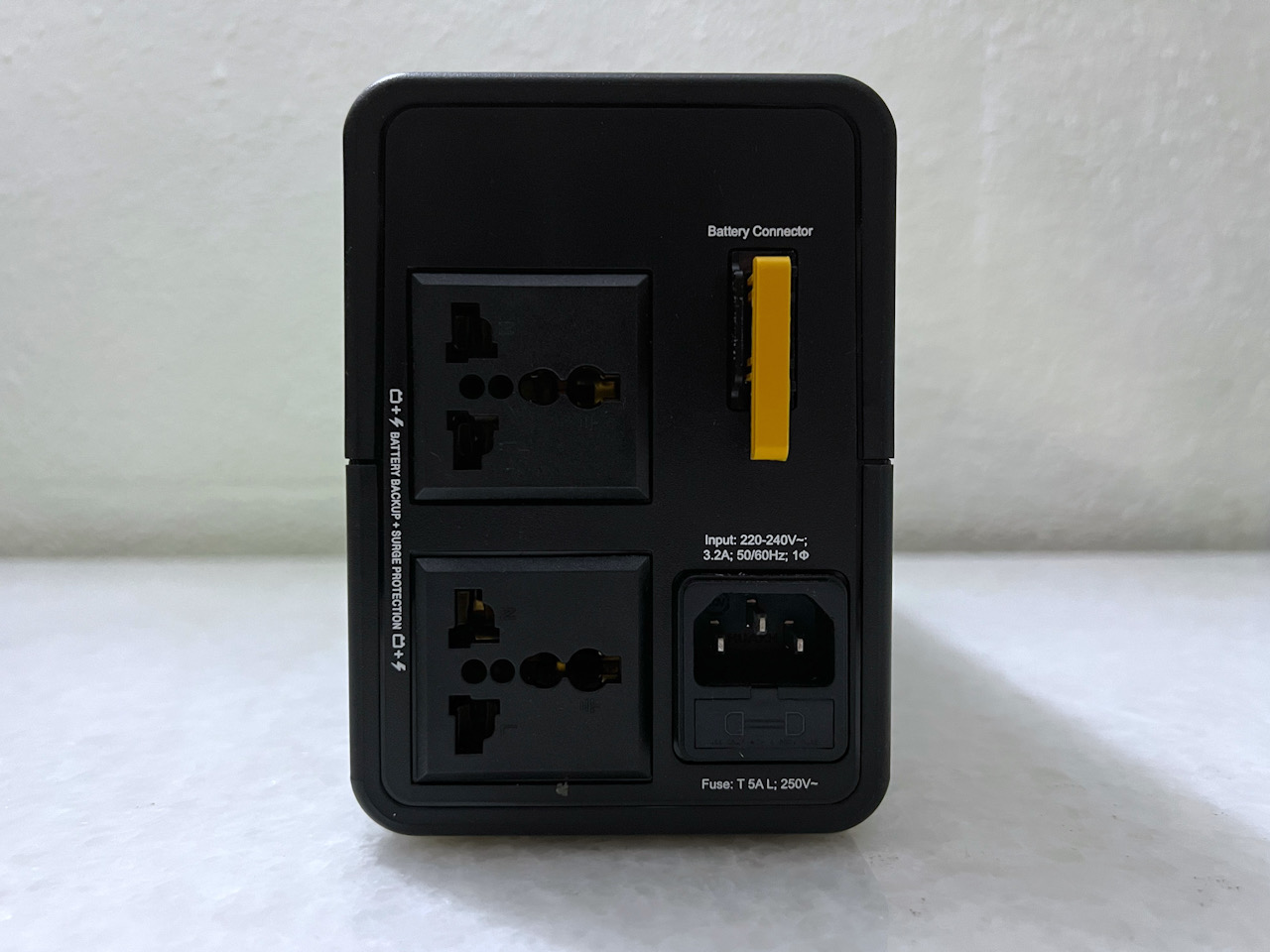 On the back you have a power input, two universal outlets with surge protection, and a physical battery connector that you can disconnect as an extra layer of protection in case of unstable conditions and you don’t want to risk damage battery.

There are no user replaceable fuses given this is an entry level model but if I really have to nitpick, is it too much to ask for rubber feet? Granted, the UPC’s 4.5kg weight should be enough to keep it planted, but having padding would be good to prevent scratches on your table.

How much battery life do you get?

UPS systems often use a lead acid battery as a power source for various reasons, but mainly because it is cost effective. Lead acid batteries are fairly consistent to operate at low and high temperatures and can handle high discharge currents, which is what you would want in a device like this. And no, you can’t stick a fridge in the end.

One downside to this battery is that you have to efficiently charge it for 24 hours to get it to full capacity – in this case it’s about a full 24 hours. But that’s the only time you have to do it due to the nature of UPS. Fortunately, when left to its own devices, the BVX700 isn’t noisy; it’s only warm to the touch.

So, how much power can this inverter provide? I managed around 45-50 minutes at best on a low power setup, but I think that’s not a realistic representation.

On the other hand, gaming setups will literally drain the battery in the blink of an eye. Depending on power consumption, you’re looking at between a minute in the extreme case and 10-15 minutes in more typical circumstances. I think 15-20 minutes seems like a good average if you have to have a number in mind.

Remember, the idea is to buy us time to safely shut down our systems, so honestly, I wouldn’t even consider pushing my luck.

Overall the BVX700 performs as advertised and in a daily context it does its job in the background and stays out of the way. In that regard, I think it lives up to its cheap insurance moniker.

Downtime alone costs more than its price, and while we haven’t had a chance to verify its actual battery life (typically three years), the annual cost of this policy is actually quite respectable when you think about it.

This article first appeared in Potions.sg.